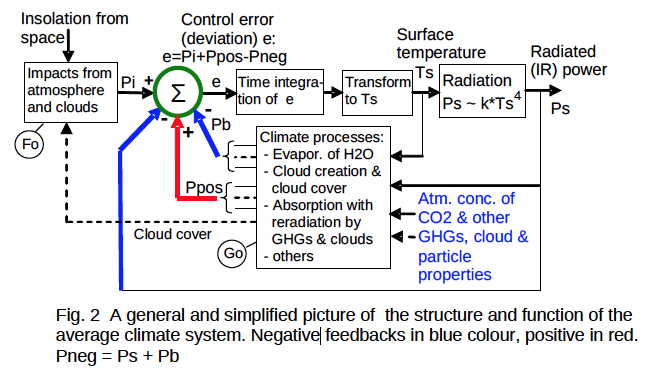 My interest of the ’CO2-business’ was initiated about 10 years ago, when I read a short essay by a retired scientist showing how small the ranges with absorption bands were for CO2 in Earth’s heat emission/absorption spectrum. Quite soon after retiring from my regular work I started to make my own estimations of how much the absorbed radiation (by greenhouse gases) could impact Earth’s average surface temperature. Beside pure curiosity there have been some other inspiratory issues, e.g. the commonly stated strong impact by a positive feed­back exerted by water vapor, which could be doubted for some quite general reasons.

After some years with fruitless calculation attempts I got a break through when I discovered a (for me) new and simple way to describe how the surface temperature of an irradiated body is defined in a dynamically case. It occurred when I in a very coarse way tried to create my own picture of how the average energy of the molecules at the utmost layer of a body (i.e. the surface temperature) developed when the body was emitting heat radiation and at the same time was exposed for heat radiation from a colder body. It became very obvious that the surface temperature was determined by an energy accumulation in the surface layer, which gave a time integration of a difference or imbalance between the emitted and the absorbed heat power. It took me an embarrassing long time to realize that I had just reinvented a usual diffusion process expressed in an integrative form.

With my background and knowledge of Control System Theory I could sketch the functional relationships as a closed loop structure, where the surface itself worked as a comparator unit that gave the difference between supplied power (absorption) and removed power (emission and possible convection). The re-moved power is a negative feedback, which dominantly is proportional to the fourth power of the temperature of the surface layer. The figure shows my view of the structure of this power conversion process (without the positive feedback by re-radiation from the atmosphere.

This simple structure made it easy for me to create an ’average climate model’ by letting the radiative temperature represent Earth’s average surface temperature and let this govern the climate processes. The latter was (and is) a bold idea because the common idea (by climate scientists) is that the power imbalance high up in the atmosphere is driving the climate system. But I think that the energy-integrating feature of Earth’s surface forces all processes towards states that give a zero power imbalance on the surface. I have not found any sustainable argument against my idea and also no convincing argument for the opposite idea. The cause for the greenhouse effect is simply that the necessary removal of insolated energy (by heat emission from the surface) is hindered by the re-radiated energy and the surface responds with increasing its temperature.

The climate processes, together and individually, constitute a closed loop system by making impacts on the power imbalance on the surface. An agent with complex impacts is the atmospheric water vapor, whose production removes energy from Earth’s surface (part of which is radiated to space giving a negative feedback), while it at the same time contributes to power absorption with re-radiation to the surface (positive feedback). Further, water vapor creates clouds with power absorption and re-radiation as well as gives a cover that reduces insolation.

Today’s existing positive feedback by water vapor and its reradiated heat power is said by IPCC to give a strong amplification of any initiated increase of temperature. But the existence of such a mechanism is contradicted by simple physical facts (eg the saturation situation for the absorption) and by considering all feedback changes that currently occur after a climate perturbation with the climate operating as a closed loop system.

These ideas about the structure and functions for an ’average climate model’ I have written down in the first part (link 1) of a two-parted essay. The second part (link 2) describes a concrete model with coarse simplifications of the physical processes. 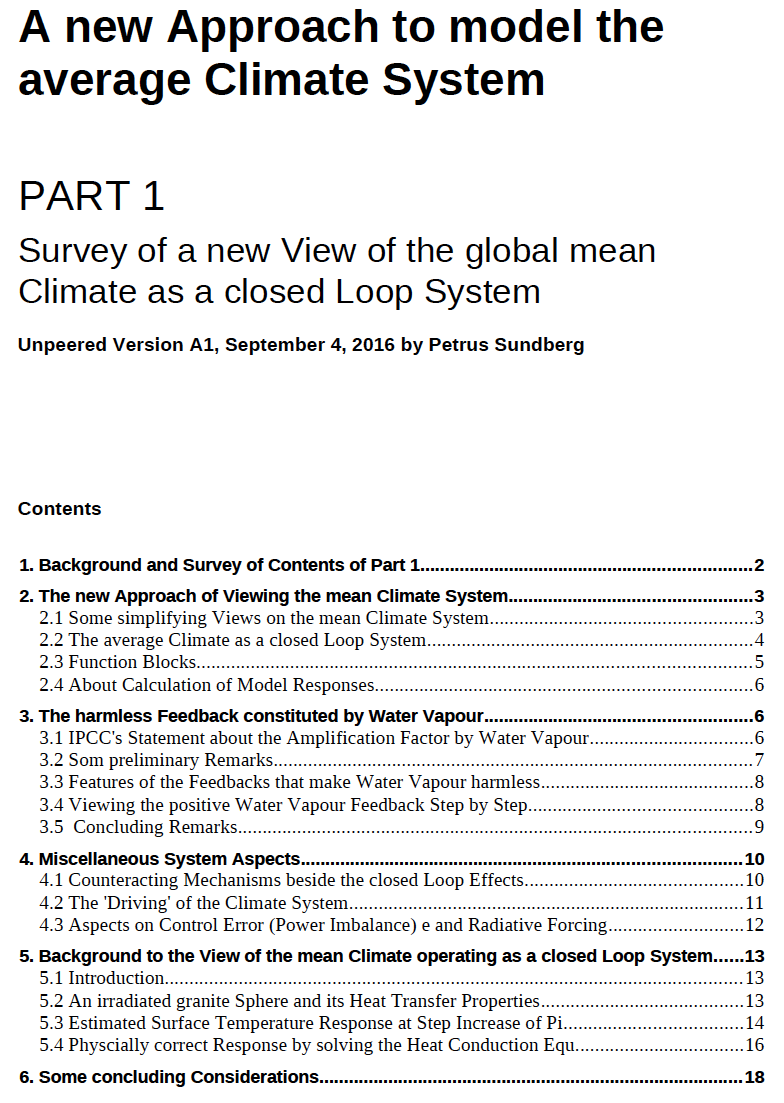 I have for the normal operation of the model chosen most of the parameter values to give a certain overestimation of the model’s ΔT-response. For a step-wise increase of the CO2 concentration from 280 ppmv to today’s value 400 ppmv, the ΔT-response is less than 0.27 °C and for a step to 560 ppmv (doubled value) the response is less than 0.40 °C. This value is noticably lower than the lowest value given by IPCC, 1.5°C in IPCC-AR5 and this is most likely due to the fundamental differences between my ’average climate’ model and the ’average models’ studied and referred to by IPCC. Further increases of the CO2 concentration gives successively smaller values of the ΔT-response, e.g. an increase from 400 to 800 ppmv only means a further temperature increase of about 0.2 °C.

Since the processes have been modeled so coarsely and the impacts of reasonable changes of the ’fixed parameters’ only give minor changes of the main results, I consider it meaningless to further discuss the value of these parameters.

Further, my model study strongly supports the idea that todays measured temperature increase of about 0.8 °C over the last 140 years only to a small part, likely about 0.3 °C, could be explained by the impact of CO2. Other GHGs also contributes to the measured temperature increase, but still, more than half of it has to be due to other factors. The model result also supports the idea that such factors could be related to cloud properties and impacts of particles and aerosols, which of course is nothing new. It is tempting to assume that these ’other factors’ to a great extent actually are anthropogenic due to burning fossil fuels But it is indeed a challenge to identify the other truly anthropogenic mechanisms, since their individual contributions (and associated state changes) are small and at the samt time operating together with other mechanisms that are to be considered as perturbations, some with long periodical variations. A further complication is that our climate is responding to the ramp-like increase of atmospheric CO2 and thus today’s state is not at an equilibrium.

(Please comment today’s longer Swedish version – not this one)