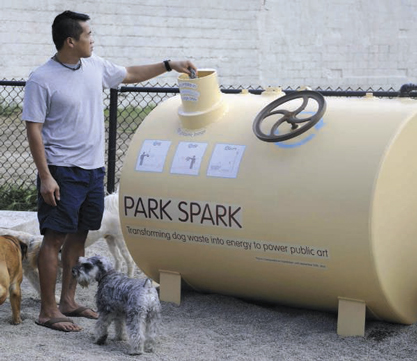 Poop-Powered
The fuel of the future might be something we produce every day: excrement.
Last month at a park in Cambridge, Massachusetts, artist Matthew Mazzotta put the idea to the test with a methane digester fueled by dog dung. Passersby picked up after their pets using biodegradable bags and threw the waste into an oxygen-free tank. As the microbes inside the dung broke it down, they released methane, which then zipped out through a tiny pipe to light up a gas streetlamp.
Machines like this aren’t limited to animal droppings. ”Anything that’s organic you can use in these biodigesters,” says Ahmad Pourmovahed, a mechanical engineer at Kettering University in Flint, Michigan, who oversaw a much larger project to turn human waste into biogas. The real question is whether waste can compete against natural gas, a fuel whose price fluctuates constantly, he says.
The microbes don’t do so well in cold weather, so on 25 September, Mazzotta had to power down the digester until spring. In the meantime, he hopes locals will think of a more creative way to use the fuel: to light a shadow play, say, or to brew tea at an eco-friendly teahouse.
(Science, 1 oktober 2010, sid 17)