LIFE IS A GAS! 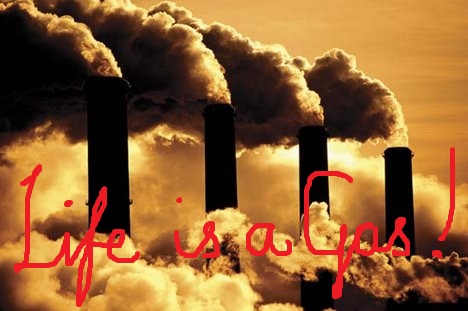 Life is a gas – CO2 –
(And oxygen of course)
But to say that it drives the climate
Puts the cart before the horse.

The ice-core samples from Vostok
Plotting temperature change over time
Revealed that in fact CO2 change
Lags hundreds of years behind.

Greenland was green when the Vikings
Settled a millennium ago;
While Frost Fairs were held on the Thames
Six centuries later, or so.

The IPCC used a Mann-made stick
To flatten this bumpy graph
To prove to us all – Q.E.D. –
That this life-giving gas ’ain’t no larf!’

They say, thanks to human endeavour
Our carbon footprints expand,
Playing all hell with the weather
And flooding both ocean and land.

Once upon a time, CO2
Was a colourless, non-toxic gas;
Now: ‘an anthropogenic emission’
On a mission to fry us, en masse.

The bottom line is that this substance
In solid or gaseous form
Will turn the world into a greenhouse
Globally warmer than warm!

Mass production and consumption
Took off at the end of the war.
Despite Kyoto, COPs and Cap’n trade
CO2 levels continue to soar.

Fossil fuels, factories and flying machines
All add their bit to a graph
That rises each year relentlessly
When it ought to be falling by half.

The temperature curve, however,
Just will not play the game:
Rise, fall, rise for a century
Now 18 years the same!

Elaborate computer models
Are the IPCC’s crystal ball
None of which have predicted
The recent no-warming-at-all.

Climate Science is now a religion
Where AGW is PC
And the MSM censure everything
Bar the Gospel of IPCC.

So worship the great god Consensus,
Believe what it tells you is Truth;
Or else you’ll be branded Denier
And stoned in the square as proof!

There cometh a New World Order
Circumventing democracy:
A Klu Klux Klan Without Borders
To purge us from sins we can’t see.

High Priest Strong said at Rio –
Leaving Greens to fill in the gaps –
”Isn’t the only hope for the planet
That the industrialised nations collapse?”

Now that’s hardly a secret agenda;
The Club of Rome endorsed it too:
”All we need is the right major crisis…”
And the scapegoat is – you know who!

The Intergovernmental Panel was founded –
Not a scientific body, please note –
Whose reports were a foregone conclusion
For which responsible nations could vote.

‘This gas must become a pollutant!’
The task for the Panel was clear:
‘Feed Apocalypse Now to your models
And fill the whole planet with fear!’

This ploy has been grossly successful –
To give credit where credit is due –
Respectable, Earth-loving persons
Now feel bad about CO2.

Every heat-wave is proof of the pudding,
Every tidal-wave out on the sea;
Whether ice-sheets are waxing or waning,
We’re the cause of it all, you’ll agree.

So tax, ban and bury your carbon!
Let the wind and the sun set you free!
The growth-rate will slow to a standstill
Spelt s-u-s-t-a-i-n-a-b-i-l-i-t-y.

Now parties of all creeds and colours
Kowtow to this climate-smart code:
Nature should be a museum
Back in pre-industrial mode.

The Germans have ’Energiewende’
Swopping nuclear power for coal.
The Brits import timber from Canada
To spruce up their CO2 goal.

The Green Lobby looks to the UN
To levy us all off the map.
Survivors will catch the Royal Virus,
Prince Philip – jolly old chap!

Meanwhile, in the real world, the Future
Has billions of new mouths to feed.
So ’power plants’ must be provided
To supply them with all that they need.

Electricity and food for all
Means carbon dioxide, you see,
In South America, Africa, Asia…
Rather than just you and me.

Now 120 parts per million –
The parts that we’ve added, let’s say –
Plus a period of gentle warming
Have made the Earth greener today

Yet ask any market gardener
What the Greenhouse Effect means to them
And they’ll tell you that king-sized veggies
Crave 1200 ppm.

The more CO2, then, the better;
Photosynthesis thrives on the stuff.
So frack up both shale gas and oil,
Of which there is more than enough!

And let us pray Global Warming
Doesn’t take a turn for the worse
As its cousin, Global Cooling,
Is definitely more of a curse.

For the Little Ice Age was no picnic:
No sunspots, no food, no fun;
And the sun’s present spotless condition
Suggests a new cold spell has begun.

So the IPCC have a problem if –
Despite the hot air they exhale –
Their cheeks and the climate start turning
A whiter shade of pale.

For Climate Change is the default,
The null-hypothetical state.
On those that say Man overrides this
The burden of proof is great.

For the climate has always been changing;
Change is here to stay.
As King Canute showed on the seashore,
Man cannot keep Nature at bay!

So, historians, when you review our time
And our hysterical CO2 Show,
Lay not the blame on us poor clowns
For your landscape of ice and snow…